Smart, data-driven decisions can help independent producers succeed. We have crunched the numbers on what to make and how to make it.

For this article, we are taking a look at the horror genre. Specifically, horror movies budgeted between $500,000 and $5 million, released domestically 2000-16.

We have boiled down all our data, statistics and modelling to a number of quick takeaways on the horror genre. They are:

1. Horror Movies Are the Most Profitable Genre

Using real-world data and statistical modelling, we are able to estimate the profitability of most major horror movies. This takes into account all income streams (from theatrical through to television syndication) and offsets all costs (including advertising, distribution and fees). We are left with a fairly accurate estimation of the Producers Net Profit for each movie.

At the top of the pile is Saw, which was hugely successful, with a likely profit of well over $130 million on a $1.2 million production budget.

In the table below, profitability is expressed as a percentage return on the reported production budget. i.e. a film which cost $2 million to make and made a Producers Net Profit of $4 million would show up as having profitability of 200%. 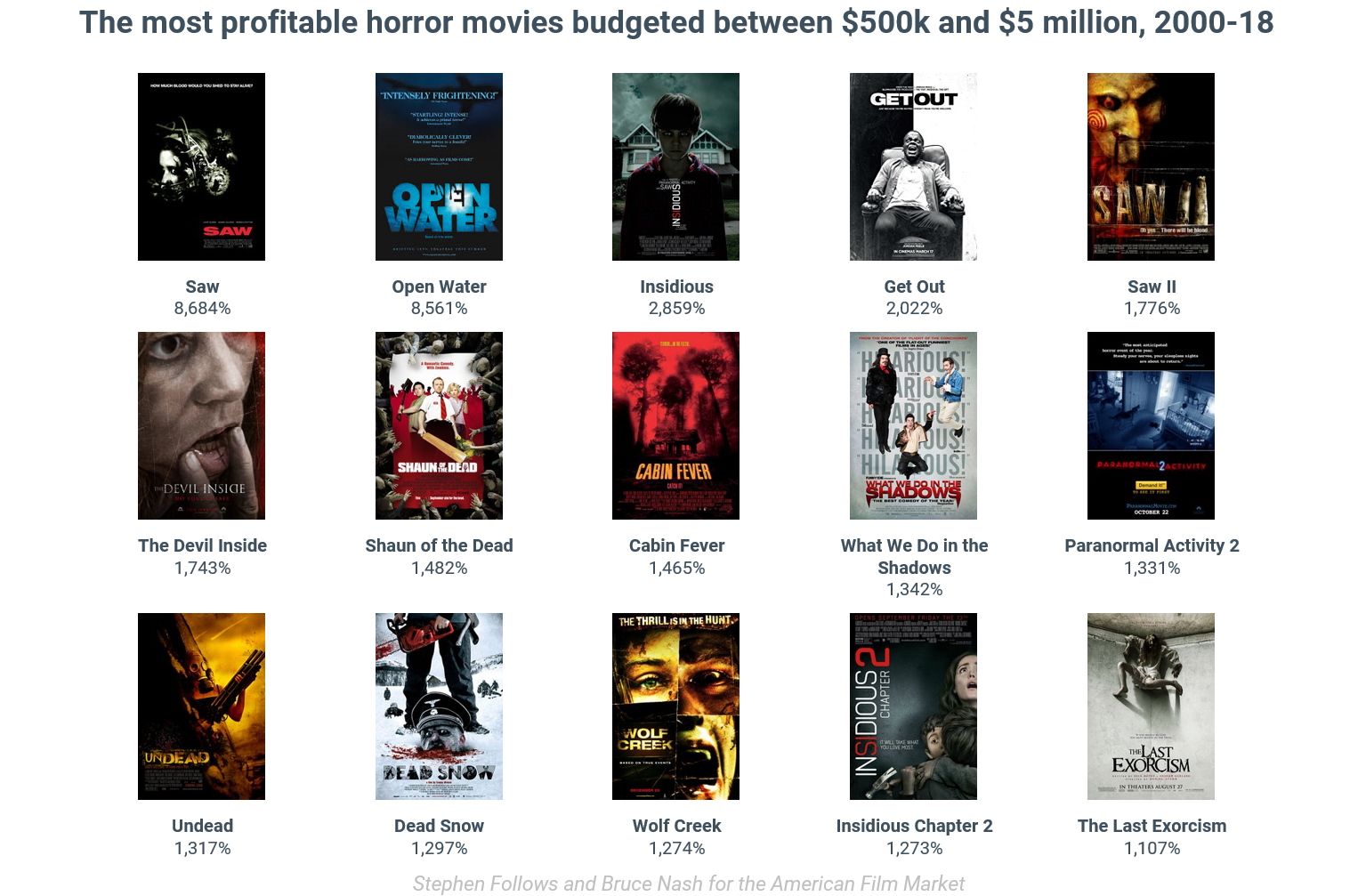 N.B. “Where’s Paranormal Activity?!” you may be thinking This study is focusing on movies budgeted between $500k and $5 million meaning that Paranormal Activity is too inexpensive to be on the list. If we had included it, it would have appeared at the top, with a public-budget-to-estimated-profit ratio of over 20,000%!

When we widen our focus and broaden our statistical model to look at all movies released, horror appears to be the most profitable of the genres. We estimate that just over half of all horror movies released in US cinemas made a profit when all costs have been taken into account. This is significantly better than dramas, of which we estimate only a third make back their total costs. 2. …but also the riskiest

Based on the analysis so far, you might be asking the question, “Why would anyone make anything but horror films?” The answer to this is two-fold. First, perhaps assisted by the favourable image from profitability statistics, horror is becoming a much more frequently-produced genre.

And secondly, it’s not all rosy. The profitability and production figures hide a risky aspect to horror films. While profitable horror films are common, so too are horror films incurring big losses. This can be seen in how long movies of each genre stay available to the public in cinemas.

On average, documentaries stay in theatres for almost 5 weeks, whereas horror movies are gone in half that time.

3. Quality Doesn’t Matter All That Much

Given the necessity for clever marketing and a good opening, it isn’t a huge surprise that, more than any other genre, the quality of a horror movie doesn’t matter all that much.

When we look at the ratings given by film audiences and film critics to the most profitable horror movies we can see that they range across the spectrum. A similar chart for, say, drama, would show a bunching of dots in the top right, showing that the quality of a drama is heavily correlated to its financial success. 4. Your Release Will Either Be Very Wide or Very Small

If your film gets picked up for a domestic theatrical release then it’s likely to get one of two releases – either very wide (i.e. over 2,000 theatres) or very small (i.e. under 50 theatres).

Why so few films in the middle ground? Again, this comes back to the relatively short legs for horror movies. The two successful release strategies are:

5. Horror Audiences Are More Likely To Be Working Class

Using exit polls of UK cinema audiences, we can see that horror movies are disproportionately enjoyed by people on the lower end of the class spectrum when compared to all other genres. Only 21% of people watching horror movies are in the top two class brackets (i.e. “A” and “B”) whereas it’s 33% for dramas. This doesn’t say that highbrow horror films can’t exist or make money, but just that the majority of successful horror movies are not artsy affairs. They play to an audience that aligns most with the make-up of the general population.

There are ten templates most frequently used to promote horror movies. 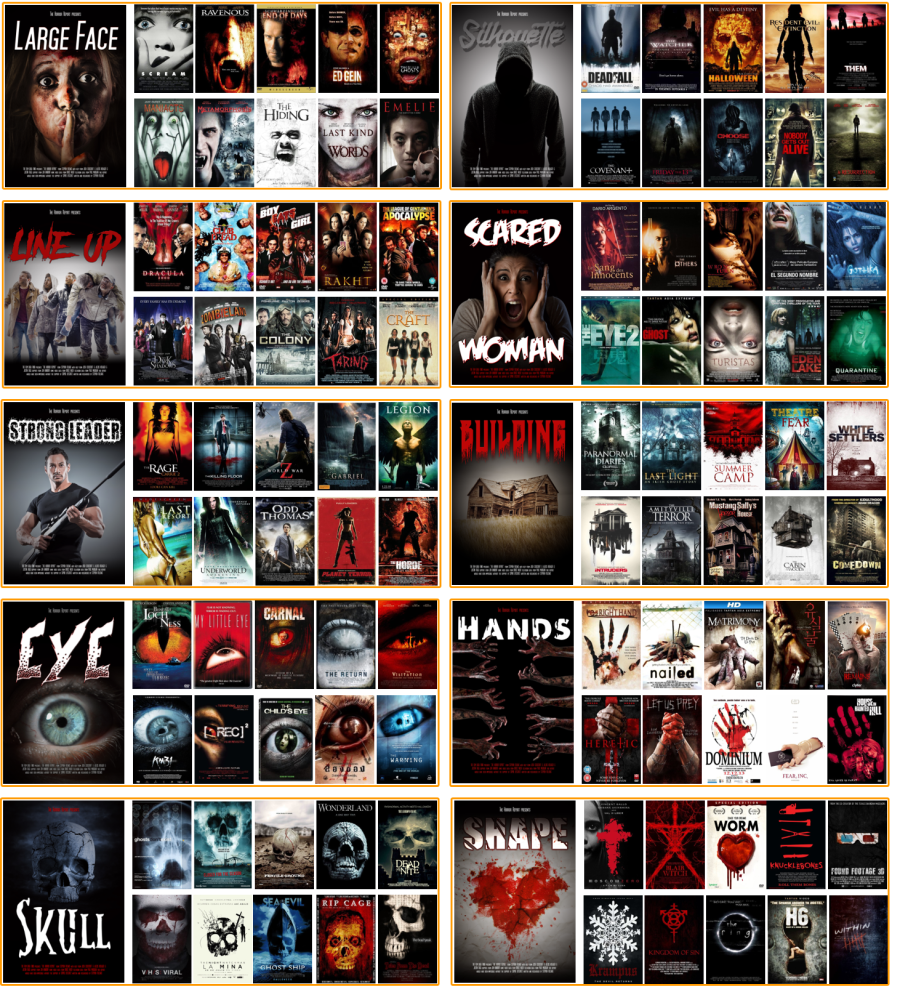 The good news is that horror is a genre that reliably produces hit movies, often on very modest budgets. In fact, measured purely in terms of profit, horror is the best genre in the industry.

The bad news is that horror is also the most hit and miss genre, with films relying on good marketing, and some luck, in order to make money. That makes it particularly important for an independent producer to find a good distributor – someone who knows how to find an audience for their film and can spend their marketing budget wisely.

The key task for the filmmaker is to think of a good hook for the film that will make the distributor’s marketing job as easy as possible. It’s worth thinking about that as early as possible in the process. Consider, for example, how the most successful horror movies of recent years (Saw, Paranormal Activity, Get Out, The Purge) were all able to convey a clear message in their trailers and posters.

If you want to learn more about the horror genre then you may be interested in The Horror Report, written by one of this article’s co-authors, Stephen Follows. Find out more at stephenfollows.com/horrorreport.